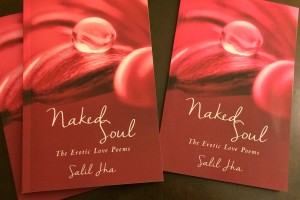 The truth is that this book while sexual in nature also has a rich history and contains beautiful poetic language. 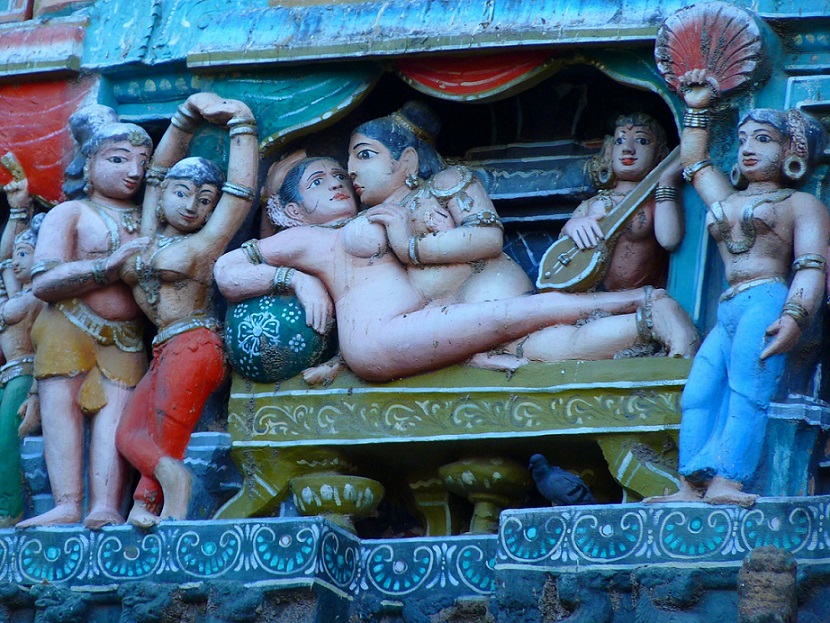 Kamasutra: A Treatise on Pleasure

Let us begin by exploring the history of this book before adventuring into its poetic nature.

The book was compiled in the third century by an Indian sage, Vatsyavana. He believed that this text that contained past sexual knowledge helped him to meditate and contemplate the divine.

The book was written in Sanskrit and its translated title means “a treatise on pleasure.” 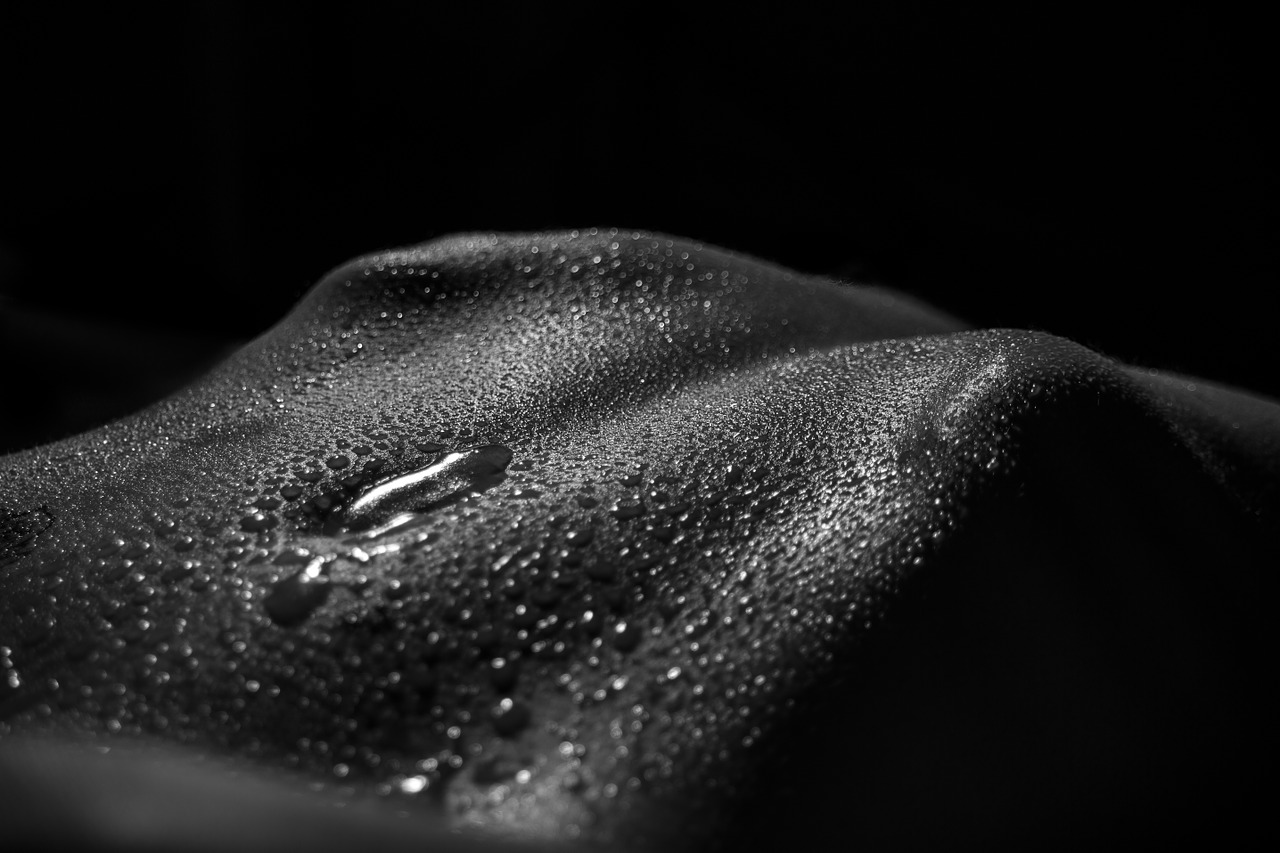 The book explores pleasure both sexually and intellectually by discussing various topics including Society and Social Concepts; On Sexual Union; About the Acquisition of a Wife; About a Wife; About the Wives of Other Men; About Courtesans; and On the Means of Attracting others to Yourself.

It essentially serves as a crucial primer on the physical and psychological aspects of romance including how men can win over women; what women can do to win over men; the states of a woman’s mind; the role of an intermediary; and why women might reject men.

The book contains charts that organize male and female physical types into categories and show how physically compatible they are with their partner.

The Kama Sutra is considered the first study of sexuality but due to the complexity of the Sanskrit it was written in it was considered obscure.

It was translated into English in the late 19th century by Sir Richard Burton, a well-known linguist, and Arabic translator.

Burton had originally been working on translating a 15th-century revision of the work, the Ananga-Ranga, but wanted to learn more about Vatsyayana who was cited numerous times in the Ananga-Ranga.

He orchestrated the effort to refer back to the Kama Sutra and translate it into English. He fulfilled his desire to publish a Western translation and stimulated widespread interest in India and other countries.

Since then it has been translated numerous times and been published in multiple versions.

The book at first begins analytically as a series of instructions on how a man should live a life dedicated to religious observance and learn to live according to the principles of what is referred to as dharma, artha, and kama.

Dharma is obeying the principles of Hinduism, Artha is based on acquiring material items and friendships, and kama is enjoying pleasure according to the lessons of the Kama Sutra.Â But then there were those who objected to pleasure and wished to keep the ideal human pursuits limited to dharma, stating:

“Pleasures should not be sought for, because they are obstacles to the practice of Dharma and Artha, which are both superior to them, and are also disliked by meritorious persons. Pleasures also bring a man into distress, and into contact with low persons; they cause him to commit unrighteous deeds, and produce impurity in him; they make him regardless of the future and encourage carelessness and levity. And lastly, they cause him to be disbelieved by all, received by none, and despised by everybody, including himself.”

The book does explore the caste system in India by describing the three classes of men including the Pithamarda, the Vita, and the Vidushaka.

Vatsyavana believed that men should really only get to know men of their own caste.

The Kama was practiced by following Hindu principles and marrying virgins who belonged to their own caste. 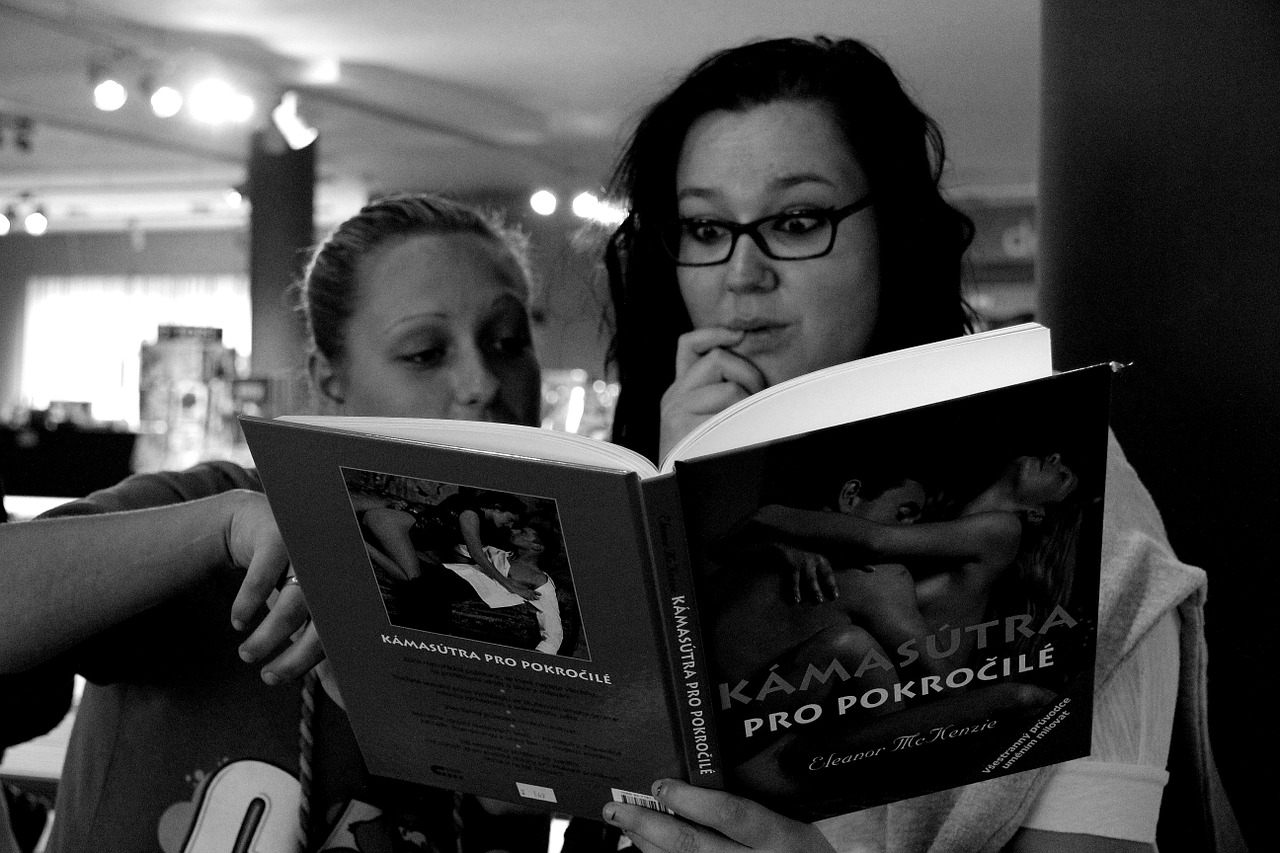 The Treatise on Pleasure

The more sensual aspects of the book begin in the second part when men were categorized according to the degree of passion they had and it was stated in the book:

“A man is called a man of small passion whose desire at the time of sexual union is not great, whose semen is scanty, and who cannot bear the warm embraces of the female. Those who differ from the temperament are called men of middling passion while those of intense passion are full of desire.”

Females were said to have a different kind of passion then men as the book explained that females wish to enjoy sexual relations with men for a longer period of time then men need to have sexual intercourse. One writer in the book was quoted as saying,

Females do not emit as males do. The males simply remove their desire, while the females, from their consciousness of desire, feel a certain kind of pleasure, which gives them satisfaction, but it is impossible for them to tell you what kind of pleasure they feel. The fact from which this becomes evident is that males when engaged in coition cease of themselves after emission and are satisfied but it is not so with females.”

Couples engage in different kinds of embraces to express the kind of love that they feel for their partner. 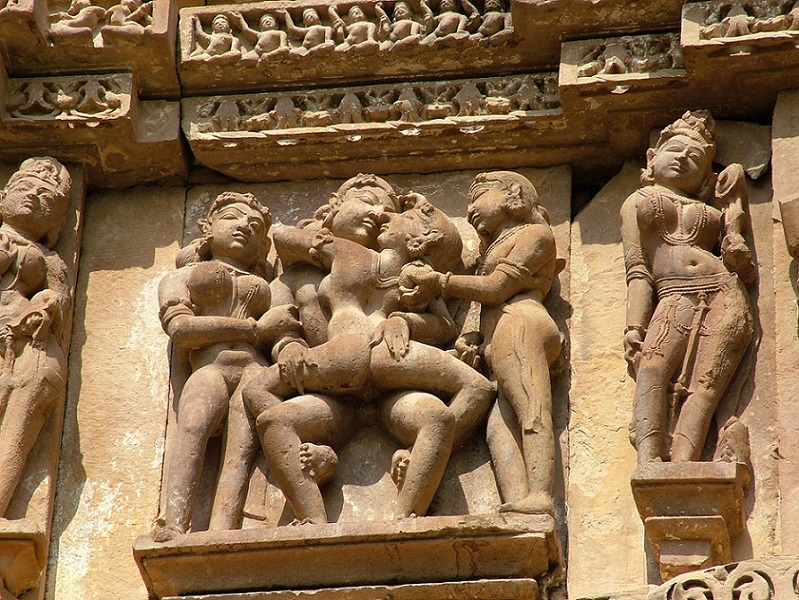 Kamasutra portrayed on the walls of the temple of Khajuraho

Vatsyavana wrote about the power of embraces when he wrote:

“The whole subject of embracing is of such a nature that men who ask questions about it, or who hear about it, or who talk about it, acquire thereby a desire for enjoyment. Even those embraces that are not mentioned in the Kama Shastra should be practiced at the time of sexual enjoyment if they are in any way conducive to the increase of love or passion. The rules of the Shastra apply so long as the passion of man is middling, but when the wheel of love is once again set in motion, there is then no Shastra and no order.”

Embracing transitions into kissing which is an even more sensual type of love.

Kisses can express love in a much deeper and personal way than merely embracing.

Women were said to enjoy other kinds of physical contact including biting, pressing nails against one another, and striking one another.

Vatsyayana wrote about this kind of contact when he said:

In addition to more physical expressions of love, there were also different ways to form sexual unions with one another. This was explained by stating:

Sexual intercourse was analogized to a dispute with your partner. It is a way to truly express opinions about each other and is very physical and romantic.

Women were said to express their pleasure in the process of making love by relaxing their bodies and showing great willingness to be united with their partners. Men should interpret pleasure by the mood of their partners during the process.

Vatsyayana wrote of this when he said:

“Though a woman is reserved and keeps her feelings concealed, yet when she gets on top of a man, she then shows all her love and desire. A man should gather from the actions of the woman of what disposition she is and from what way she likes to be enjoyed. A woman during her monthly courses, a woman who has been lately confined, and a fat woman should not be made to act the part of a man.”

Men helped women get in the mood for sexual intercourse by conversing with them and embracing them with affection.

This would help a woman to be filled with love and desire for her partner. There were said to be different kinds of sexual partnerships including the loving congress; congress of subsequent love; congress of artificial love; congress of transferred love; congress like that of eunuchs; deceitful congress; and congress of spontaneous love. Vatsyayana said that men who were skilled in the arts of love were admired and respected.

From sexual unions, the relationship transitioned into something much deeper and into a permanent marriage. Vatsyayana said:

“A man should fix his affections upon a girl who is of good family, whose parents are alive, and who is three years or more younger than himself. She should be born of a highly respectable family, possessed of wealth, well connected, and with many relations and friends.” 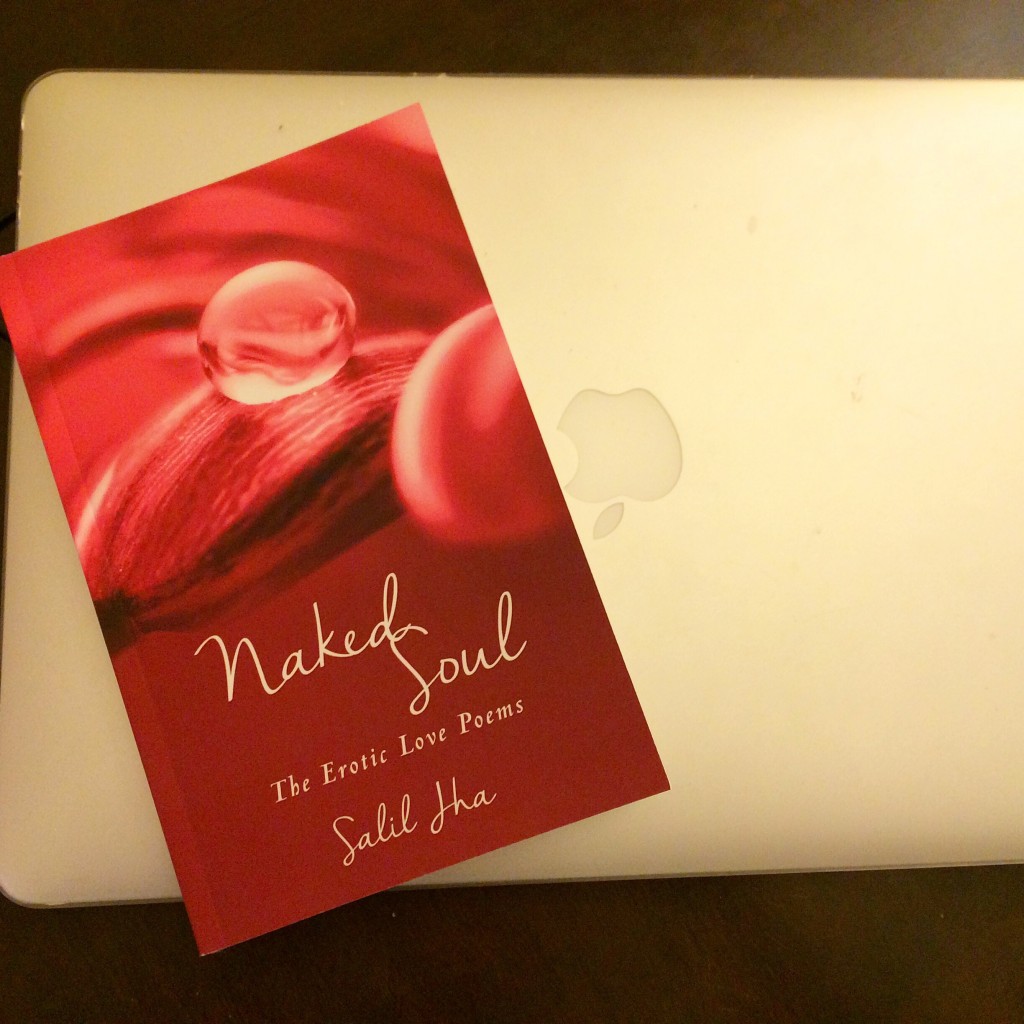 Once the couple has been married, a man then had to make an effort to instill a sense of trust in their partner. Earning her trust involved embracing her, kissing, and engaging her in conversation. The husband would then ask his wife if she liked him.

Vatsyayana wrote about what she should say to such a question:

“She should remain silent for a long time, and when at last importuned to reply, should give him a favorable answer by a nod of the head.”

Once the wife became more comfortable with her husband, he would then touch her whole body and teach her about the arts of love.

It is now evident that a romance is something that requires great effort on the parts of both partners in a relationship.

The Kamasutra describes the stages of romance extensively and how the couple should act towards one another. While the book is an ancient text, some of its advice still holds true today and can be adhered to by all couples.