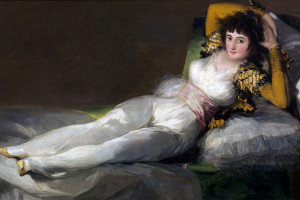 In this post, I will be stressing these two main valences of the nude in art. The reason is fairly clear: the nude was a major theme even in more traditional and less daring artistic trends such as the Renaissance, Romanticism, and even Greek and Roman art.

Secondly, in the works of many male artists, we find a somewhat detached perspective that is meant to show us physical qualities without much subjective involvement.

The eye of the artist (as well as the eye of the beholder) is free to add eroticism to the nude. However one cannot help noticing the feeling of distance that makes the body itself the foreground of the art rather than whatever excitement and feelings of pleasure the nude may produce.

If subjective perspective was usually deemphasized while pure carnality stayed in the foreground in an attempt to objectify the body to a certain extent, at least intense contrasts and shades could offer a more sensuous experience to the viewer. It’s as if light and shadow touched the female body, isn’t it?

For certain artists, the female body is treated as a sacred object that was only half-eroticized. Just think of painters such as the Spanish romantic painter, Goya (click to see their paintings),

Or, Botticelli, an Italian renaissance painter;

Or, Ingres, a French neo-classical painter;

Or, Waterhouse, an English pre-Raphaelite painter. Eroticism arises out of variation and a feeling that the body is unattainable, not close enough, not visible enough in all its details and angles. If you pay attention to more traditional paintings, the woman is either lying on a sofa/bed/another vertical surface in the most frivolous and nonchalant posture possible, or reveling in the beauty and freshness of nature, sometimes among other people.

What About Male Nudes? You rarely find the male body fetishized to the same extent as the female nudes. Shape and muscle tonus are more important than curves, intimate body zones, or sexualized postures. It is the female body that contains an aura of powerful fascinating eroticism which is intensified by extreme variations on the same theme.

How many nudes were painted during the Renaissance, the Baroque, the Rococo, or later? Probably over ten famous paintings. You surely know Goya’s enigmatic Maja or Botticelli’s Venus (see below). Sandro Botticelli’s The Birth of Venus


However even with such an emotional palette he also approached the female body in a rather challenging way. For instance, he painted his famous Madonna (click to see) which eroticizes the religious icon of the Virgin Mary. Not something insignificant at all! Munch keeps his gloomy and somewhat disturbing painting style while approaching a subject that is so delicate and yet so arousing. It is especially the male public that responds to this eroticization of the religious figure; however itâ€™s safe to assume female viewers are also quite permissive towards good art and a provocative attitude. Obviously cubism is pretty abstract art and the female faces may seem a bit mechanicized and devoid of feelingâ€¦.but in this painting itâ€™s the bodies and the exhibitionistic postures of the women that matter. The woman is no longer represented as a big cat lying gently and idly on a sofa while exposing her beauty to the viewer. Female sexuality is now raw, harsh, active, mobile, insinuating of real sex due to the women’s aggressive and ostentatious positions. Some of them are quite overtly evocative of the female genitalia. But itâ€™s not only the shape and sexual symbolism that strikes us in Oâ€™Keefeâ€™s paintings. Thereâ€™s a distinct emotionality conveyed at the same time. You can feel exuberance and love of life in almost every petal of the flowers in Oâ€™Keefeâ€™s paintings. Thereâ€™s a sharp vibrant vitality screaming through all her paintings that you cannot not associate with sexuality. The Use of Natural Imagery

Sometimes floral or other kind of natural imagery is depicted for its own sake … as an eulogy to the beauty in the environment. However thereâ€™s something distinctively feminine in her whole style and perspective. You could hardly picture a male artist painting all that floral and flowery sophisticated imagery. Thereâ€™s a finesse of lines that embody femininity and an eye for the right angle and distance that also suggest a female perspective. It doesnâ€™t feel like a detached or objectifying look or lens.

For example, as you have seen above, there is definitely that living emotionality in Oâ€™Keefeâ€™s paintings. The close-up to simple wonders in the natural world which also evoke female sexuality in a more or less explicit way convey a typically female dexterity in playing with distance and seeing deep inside of things. Strong vibrant colors, ingenious intimate floral shapes, visible emotional undercurrents in most of her paintings â€¦ all that speaks more than one hundred nudes, donâ€™t you think so? Frida Kahlo was a very sexual and independent woman who acted according to her own feelings and listened to the beat of her own drum instead of paying too much attention to social or cultural convention. Her art is also typically female in a very intimate, very sentimental way. As you probably might know, Frida had a quite tragic life after a severe accident. Her paintings reflect her tormented internal life as well as her powerful sexuality, although in a more twisted form. Her paintings represent the female body in a distorted and suffering-bound form while still being eroticized. Look at her The Broken Column. What is striking in Kahloâ€™s paintings is the fact that sexuality is communicated primarily through the body, but the face of the figures who are represented are still important. Itâ€™s not the expressionless and coldish face in traditional nude paintings that almost fades in the background as the body is fetishized and objectified. There is a sharpness and an aggressive impulse in her paintings that almost seems male. Look at this one for example.Â Does that lower the value of her art? By no means. Sheâ€™s just a very interesting case. She is a female painter who chose to â€œungenderâ€ herself as an artist and approached the classic figure of the nude in a novel, even daring way without resorting to emotionality or allusions of feminine sensitivity.

Tamara’s approach to physicality and sexuality are straightforward, exhibitionistic, and provocative through a slightly ironic tinge. Quite wonderful for a female painter! SheÂ is an interesting example that suggests an escape from femininity into a grey area in terms of gender imprint. Sally Mann is incredibly creative and ingenious. She has an extraordinary eye for detail, she senses light and shadow as the air that one breathes, and she has a gift for very inventive, provoking, and ambivalent scenes and images that stir contradictory reactions. On the one hand, you notice her refinement and her use of subtle and even graceful expressions, postures, and facial features; on the other hand, you canâ€™t help responding to the challenging and thought-provoking side of her photographs.

Well, as you probably already know thatÂ Sally Mann eroticizes some of her children. It depends on the photograph. Sometimes you get an ambiguous image in which atmosphere and vibe seem to prevail and a naked body looks accidental. The gymnast girl on the table is a great example.

Other times Sally Mann pushes boundaries full force as she literally represents a child dressed in adult clothes and embellished with make-up while displaying a naked upper body. The girlâ€™s expression is serene, confident, unflinching, adult-like.

Whatâ€™s even more provocative and edgy is the way she sometimes overtly sexualizes children when she places them in clearly sexual postures whose realism is amazing. Look at this girl sitting on a wooden fence.