The Greeks and the Birth of Western Philosophy 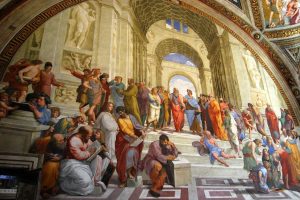 The Ancient Greeks believed that the best way to understand human nature is by using philosophy, which uses logic and reason to arrive at the truth.
Philosophy dates back to ancient Greece before Christianity was even invented.
Socrates was one of the first philosophers who used a method called ‘dialectic’ in order to question people’s opinions on certain matters, and then he would go on rants about how they were wrong or misguided.
Fun Fact: The word philosophy originated from the Ancient Greek word “philosophía” which means “the love of wisdom” (philo means “to love” and sophía means “wisdom”). 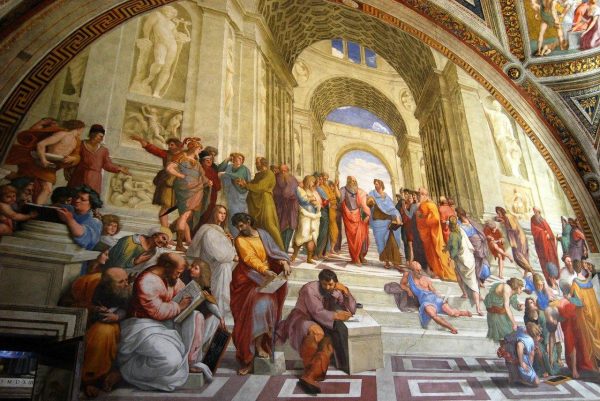 The School of Athens fresco by Raphael

A lot of the ancient Greek philosophers were influenced by a group called the ‘Pre-Socratics’ which, as the name suggests, came before Socrates. They believed that everything in nature was made up of four elements:
These elements were present in all things, including humans.
One thing that the ancients Greeks didn’t believe in was God. If you look at all their stories, most of them are about demigods who have human flaws or are just humans themselves.
When asked about his beliefs in Gods,  Socrates said:
“I thank the gods that I am not influenced by any.”
What Socrates meant was that he was glad to be free from religion and religious superstitions.

The Greeks believed that if you wanted to understand the world, then the best way was through philosophy.
They used logic and reason to discover truth rather than superstition and religion. In fact, Socrates was actually put to death for corrupting young minds with his original ideas.
The Greeks believed that humans were capable to learn and grow and that they could live without a ruler. They felt like democracy was the best form of government because it allowed for free speech and freedom in general.

After Socrates’ death, Plato founded the Platonic Academy and Platonic philosophy. As Socrates had done, Plato identified virtue with knowledge. This led him to questions of epistemology on what knowledge is and how it is acquired.

Plato believed that the senses are illusionary and could not be trusted, illustrating this point with the allegory of the cave.

He thought that knowledge had to be sourced from eternal, unchanging, and perfect objects, which led to his theory of forms. Alfred North Whitehead claimed that “Philosophy is footnotes to Plato”.

The Cynics considered the purpose of life is to live in virtue, in agreement with nature, rejecting all conventional desires for wealth, power, and fame, leading a simple life free from all possessions.

The Cyrenaics promoted a philosophy nearly opposite that of the Cynics, endorsing hedonism, holding that pleasure was the supreme good, especially immediate gratifications; and that people could only know their own experiences, beyond that truth was unknowable.

The final school of philosophy to be established during the Classical period was the Peripatetic school, founded by Plato’s student, Aristotle. Aristotle wrote widely about topics of philosophical concern, including physics, biology, zoology, metaphysics, aesthetics, poetry, theater, music, rhetoric, politics, and logic.

Aristotelian logic was the first type of logic to attempt to categorize every valid syllogism. His epistemology comprised an early form empiricism. Aristotle criticized Plato’s meta-physics as being poetic metaphor, with its greatest failing being the lack of an explanation for change.

Aristotle proposed the four causes model to explain change – material, efficient, formal, and final – all of which were grounded on what Aristotle termed the “unmoved mover”.

His ethical views identified eudaimonia as the ultimate good, as it was good in itself. He thought that eudaimonia could be achieved by living according to human nature, which is to live with reason and virtue, defining virtue as the golden mean between extremes.

Aristole saw politics as the highest art, as all other pursuits are subservient to its goal of improving society. The state should aim to maximize the opportunities for the pursuit of reason and virtue through leisure, learning, and contemplation.

Aristotle tutored Alexander the Great, who conquered much of the ancient Western world. Hellenization and Aristotelian philosophy have exercised considerable influence on almost all subsequent Western and Middle-Eastern philosophers.